Upgrade to SSD and breathe new life into your old MacBook Pro. The single best thing you can do to breathe new life into it is replace its traditional spinning hard drive with a solid-state drive. There’s a reason that all modern MacBook and the vast majority of all laptops sold today use SSDs. They are more energy efficient, more reliable and quieter than hard drives with magnetic, spinning disks. And they aren’t nearly as costly per gigabyte as they once were.

Swapping out your old hard drive for a modern SSD is surprisingly affordable and results in 5X better performance, SSD are now available from 240GB to 1TB,both considerably cheaper than a new MacBook.

If, you’re noticing any of the following issues, an SSD upgrade for old MacBook, will most certainly help:

·         Sluggish performance in resource-intensive apps such as Adobe Photoshop

·         Permission denied errors to files that were previously fine 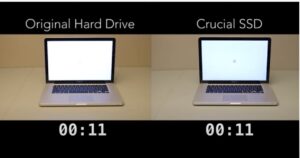 Using a MacBook Pro with Retina display (most models after the year 2013)? These Macs don’t officially support being taken apart so we would need to check and confirm whether or not an upgrade is possible. Almost all retina Display MacBook, come with some kind of SSD and thus it is not possible to upgrade to SSD for these newer models. Though, it would be possible to upgrade these models with a higher capacity. Again we need to check for compatibility.

A new SSD drive for your Mac will make an instant impact. Apps will launch faster, files will save quicker, and multitasking will be a much smoother experience. MacBook startup and shutdown would be extremely quick.Enjoy slick performance for many a year to come.